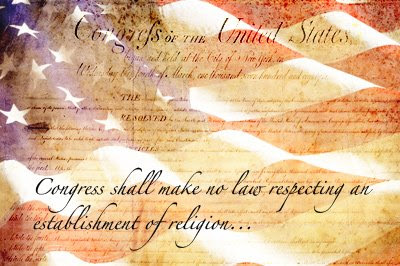 When I wrote the first post about Rep. Justin Harris and his daycare, Growing God’s Kingdom (“GGK”), I purposefully kept the post focused entirely on the money received and not the propriety of the money itself.  As the story has grown and unfolded, a couple people have asked about the Arkansas Better Chance (“ABC”) program funding an overtly Christian daycare.  For example, David McAvoy wrote:

There’s something else I was told, this coming from a lady who had thought about enrolling her children in Harris’s preschool who asked to remain anonymous.  According to her, there’s not only a “God clause” you have to sign saying you’re okay with your children being taught Judeo-Christian Values (I don’t know if that’s a 1st Amendment issue or a way around one considering the school takes funds from the government.) but, according to her, children aren’t allowed to wear clothing with Scooby Doo or the Powerpuff Girls as they’s characters are apparently “Satanic.”

Whether he realized it at the time or not, David’s parenthetical aside brings up the single most salient point in the whole discussion — that the money goes directly to GGK.

Allow me to explain.

ABC was created in 1991 via HB 1400 (introduced by Rep. Ernest Cunningham of Helena), and was codified as Arkansas Code Annotated §§ 6-45-101 to -110.  As originally implemented, ABC only allowed “non-sectarian” daycares and similar programs to apply for money.1 This was abrogated in 2001 through HB 2241, sponsored by Rep. Pat Bond, which allowed the money to go directly to “sectarian or sectarian-affiliated programs” provided the programs are first reviewed to ensure that there is no Establishment Clause violation in giving them money.

Just for the sake of being thorough, recall that the First Amendment reads, in pertinent part:

The bolded text is, of course, what has become known as the Establishment Clause.  (The second half of the sentence is the Free Exercise Clause.)

In Everson v. Board of Education, 330 U.S. 1 (1947), the Supreme Court determined that the Establishment Clause was incorporated and made binding upon the states through the Due Process Clause of Fourteenth Amendment.  The Everson court wrote, “In the words of Jefferson, the clause against establishment of religion by law was intended to erect ‘a wall of separation between Church and State.'”

In ruling that these laws violated the Establishment Clause, the Lemon court fashioned a three-pronged test, whereby the state action must:

1. have a secular legislative purpose;
2. not have the primary effect of either advancing or inhibiting religion; and
3. not result in an “excessive government entanglement” with religion.

According to the Court, if a state measure failed to meet even one of the prongs of the test, it would be invalidated.

In Zelman v. Simmons-Harris, 536 U.S. 639 (2002), however, the Court created a slightly different test for state actions that result in tax monies being paid to religion-based schools. The court upheld an Ohio law that gave parents in failing school districts vouchers that could be used at private schools, including religion-based schools. The Zelman court made the Lemon test slightly more clear for such situations; in order for a state voucher program to be valid, it must meet all five factors of the Private Choice Test:

1. The program must have a valid secular purpose;
2. The financial aid must go to parents and not directly to the schools;
3. A broad class of beneficiaries must be covered;
4. The program must be neutral with respect to religion;
5. There must be adequate nonreligious options.

While the DHS program may, in fact, satisfy prongs 1, 3, 4, and 5 (I have no data on prongs 4 or 5 that would suggest it does not), it obviously does not satisfy prong 2.  The ABC money goes directly to GGK and other schools in the program, and it goes to the schools in amounts far beyond what is needed to cover the students’ tuition, going so far as to include some start-up funds as well as money to pay rent, teachers’ salaries, and other costs.

Why is this plan in effect, then?  As best I can tell, it’s because no one has challenged the statute as amended in 2001 in court (federal or state).  I assume that is only a matter of time, really.

I write all of this knowing that someone out there is going to read it and think “what do you have against helping at-risk kids in underserved areas?!”  The answer is that I have nothing against that.  In fact, I am strongly in favor of that, and I would even be willing to pay slightly higher taxes to increase the number of children the state is able to help.

What I am not ok with, however, is a blatant violation of the Establishment Clause (and, arguably, of Arkansas Constitution article 2, section 24).  I would think that a distaste for unconstitutional uses of tax money, whether for religious purposes or not, would be the type of thing that liberals and conservatives alike could agree on.

One other random thought on the whole Rep. Justin Harris storyline:

Of course, the state’s main liberal blog was quick to pile on Harris for being a hypocrite for taking state funds and having undocumented students.  It is no surprise.  Harris disagrees with Max’s ideology so he must be evil.

Of course, if he had denied enrollment to these students I am sure he would be called a racists. It looks to me like Harris is running a successful preschool that is rendering services to low income students in his area.  In reality, this is the reason for the large amount of state funds.  Harris is not a sponge on the state but rather the state is assisting low income family afford to attend his preschool.

I think Tolbert is a little off-base here.  The issue, at least in my opinion, is not so much the amount, but the hypocrisy oozing out of the comparisons between Harris as a legislator and Harris as a citizen of the state.

It’s the hypocrisy in having this on his website:

when (a) he’s only an entrepreneur creating jobs because of government spending, and(b) he has much of his tax “burden” paid by the ABC funds.

I also think Jason might have read a little too much into how Rep. Harris interpreted the statements from UA Vice Chancellor for Government and Community Relations Richard Hudson.  First, if Harris was not worried about the information coming out and was sure everything was on the up-and-up, why would he worry about the statement or feel threatened by it?

Second, as Blue Arkansas noted, Harris has a track-record of bizarre overreactions when pressed on an issue, going so far as to have his wife call the police when a reporter asked him about the ABC money.  I’m not saying it was or was not a threat, because I have no way of knowing. I am saying that I wouldn’t accuse anyone of hardball politics based solely on how Justin Harris reacted to a statement any more than I would accuse someone of being anti-gun based solely on how Ted Nugent reacted to a statement.