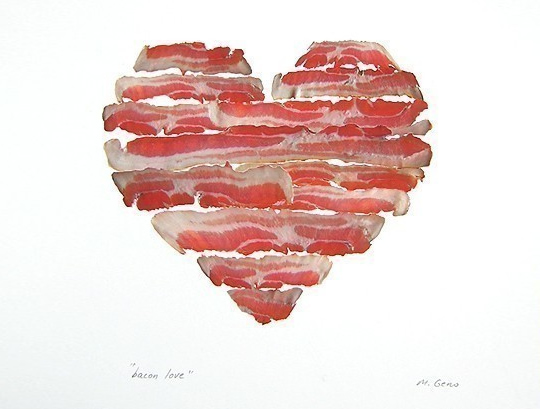 And now for something completely different.

When I’m not working, blogging, or conspiring to win the hearts and minds of Razorback fans, I like to look for excuses to fire up this glorious hunk of steel[foot]You should totally click on that link.[/foot] and engage in the wonderful art of slow-cooking dead animals.

Recently, I decided to use this hobby in a new and delicious way: homemade bacon.

For something that tastes so amazingly wonderful, bacon is relatively easy to make.  All you really need is a pork belly, curing ingredients, and time.[foot]Not coincidentally, I’m pretty sure that’s also the recipe for world peace.[/foot]

Now, while you might be able to find a pork belly at your local grocery store, odds are good that whatever you find will weigh one or two pounds.  If you are really lucky, you might find something in the four-pound range.  Four pounds of bacon?  What is this, bacon for ANTS?!  We need a pork belly at least three times bigger!

So it was that I found myself emailing with Katie from Farm Girl Natural Foods about acquiring a whole, uncured pork belly.  A couple Saturdays later, I went to Katie’s booth in the Argenta Farmer’s Market and picked up a 15-lb chunk of recently killed pig.  How big is 15-lbs of pork belly?  This big:

It is at this point that I should mention what an obvious difference it makes to get a pig that has been raised like they raise them at Farm Girl Natural Foods.  With most pork (including bacon) that you get at the grocery store, you have three visibly different forms of fat: soft (white) fat, hard (gray) fat, and stringy connective tissue that holds some fat pockets.  All of those fats render at slightly different temperatures, but only the soft white fat really melts and gives you that umami we all seek.

Thing is, when you raise a pig in a more natural environment, the ratio of soft fat to hard fat increases.  A lot, in fact.  So look at how Farm Girl Natural Foods describes raising their pigs:

Our pigs live low-stress lives enjoying the the great outdoors of our densely wooded pastures. We do our best to treat them kindly, feed them well, and respect their “pigness”. They eat a smorgasbord of lush forages and gleanings from the woods, fresh whey from artisan cheese producer Kent Walker, and specially balanced, GMO-free grains.

With that kind of life, you suddenly understand why the fat on this pork belly looks so different.

That’s nothing but perfect, soft, white fat. You should be drooling at this point.

Once the belly was skinned and trimmed, I was left with about 10 lbs., which I trimmed into five roughly-two-pound slabs.  Then I took

and put each slab in a large Ziploc with the air removed.  (One slab was left unpeppered, obviously.)  Sealed up, it was time for everyone to take a week-long nap in the fridge, being turned once per day to evenly distribute the cure.

After a week of curing, we were left with five slabs that were more dense and more bacon-y in texture than the raw pork that had gone in the bags.

[Science tangent: In case you were wondering, the difference between brining and curing is that brining is a type of curing.  In this case, we aren’t brining because we have added curing salt (6.25% sodium nitrite), which results in the drawing out of water from the cells, leaving us with a denser, firmer texture.  With a true brine, more water is forced into the cells by osmotic pressure, resulting in juicier meat, which is why brining works so well for turkey and pork chops.]

From there, it was time for a nap in the smoker at 225 degrees for about 2.5 hours, until the internal temperature of each slab hit 150 degrees.  As with any meat, however — even two cuts of meat from the same larger cut — cooking times vary noticeably.  The first slab took just over 2 hours, while the fifth took almost 3.  You should always, always, ALWAYS cook to temperature, not to time.

Then it was back in the fridge overnight to cool, firm up, and get ready to be sliced and cooked for Baconalia 2013: The Enporkening, which is what I nicknamed the all-bacon lunch I was about to prepare for my family and friends.  (Side note: If anyone wants to turn Baconalia into a yearly Little Rock-based event, I’m all ears and happy to help.)  The following morning, the slicing and cooking began for the following menu:

We toyed with the idea of some bacon-laden bloody mary cocktails as well, but decided against it because (a) I don’t really like bloody marys and (b) we already had beer.  Still, you’re absolutely right to be jealous, bloody mary or not.  It’s ok.  We don’t judge.

After curing, smoking, and chilling, the perfectly white fat of the slabs was even more pronounced.  Think of the last slab of store-bought bacon you looked at, then look at this cross-section.

As for the finished product?  Just wow.  First off, I cannot say enough good things about the quality of the meat from Farm Girl Natural Foods.  I’ve never seen pork even close to this beautiful at Kroger or even at Hogg’s in North Little Rock.  Between that high-quality pork, the slow-curing process, the well-monitored smoking, and the patience to give every step the proper amount of time…it was just the most amazing bacon-related experience I think I’ve had.

An Open Letter to the Ark...