Science: Snow As A Byproduct of Global Warming

I really hoped I would get through this snowstorm without having to write this post.  Honestly, I did.  But, having just read the 4,552,395th snarky comment about “global warming” and the snow, I feel like someone needs to attempt to set the record straight.  As I have nothing better to do at the moment, I suppose I might as well do it.

Global warming has me stuck in Little Rock.

The implication, of course, being that there shouldn’t be this much snow at this latitude if global warming is real. Or something like that. While it probably shouldn’t bother me what other people think about silly subjects like “science,” it does. (This is the same reason that Mark Martin’s intelligent-design bill irked me.) Before we get into the science of all of it, however, let’s look at Krugman’s recent take on it.

So, let’s start with an observation: weather varies. (Duh.) Heat waves and other stuff happens. Think of it in terms of a probability distribution for temperatures, with the area under the curve over some range representing the probability of temperatures in that range in a given place over a given period. And define an extreme event as a case in which the temperature exceeds some threshold. The the picture looks like this: 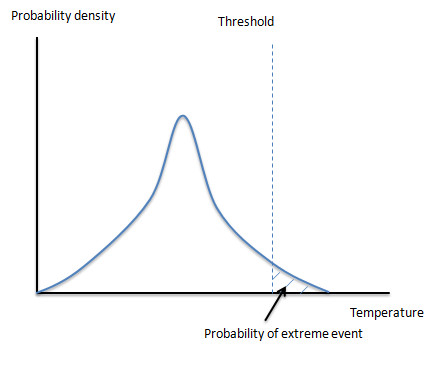 Now suppose that a warming trend shifts the whole probability distribution to the right — which is what we mean when we talk about climate change. Then the result looks like this: 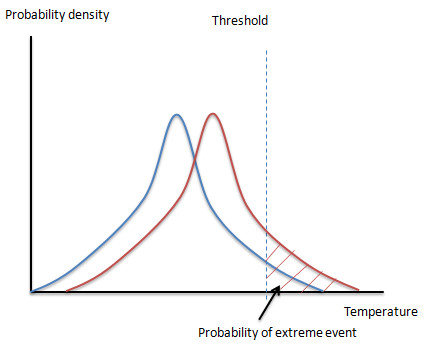 As Krugman explains, the shift to the right increases the average temperature world-wide and increases the probability of extreme weather events on the right (warm) side of the distribution, but it does not remove the left (cold) side of the distribution. Meaning that cold snaps can and will still happen, though with a lesser frequency world-wide.

Just as importantly, at least for our discussion, Krugman notes:

Second, no individual weather event can properly be said to have been “caused” by global warming. Heat waves happened 30 years ago; there’s no way to prove that any individual heat wave now might not have happened even if we hadn’t emitted all that CO2.

Which is to say that no specific short-term temperature trend in either direction is caused by global warming; to say otherwise is to conflate the ideas of “weather” (i.e. what you see outside your window right now) and “climate” (i.e. the cumulative pattern of weather over the longterm).  Besides, focusing on your local weather ignores that global warming, by definition, is indicative of a pattern of world temperatures over a timeline.  And the upward trend is indisputably measurable.

It’s also worth noting that an increased amount of snowfall is in keeping with global warming for at least two reasons.  First of these is increased evaporation.  Evaporation is, basically, the escape of higher-energy molecules from the surface of a liquid.  At lower temperatures (energies), fewer molecules are able to escape.  (While not exactly analogous, think of a basketball left outside — the higher the temperature, the more the molecules in the ball are excited, and the more inflated the ball seems.)  As world-wide temperatures rise (1.4 degrees Fahrenheit since 1880), the rate of evaporation world-wide increases ever so slightly, resulting in more moisture in the air.  This is especially noticeable in the winter, oddly enough, when the air tends to be drier on average (again due to lower temperatures).

The second reason, related to the first, is that warmer air can hold more moisture than can cold air.  (Really, reasons one and two are pretty much two ways of stating the same reason, but it bears fleshing out for purposes of this post.)  More accurately, warm air is a more conducive environment for gaseous water than cold air because, when water molecules lose energy at lower temperatures, they tend to revert to liquid or solid form.  Everyone has heard the phrase “too cold to snow;” cold air’s inability to hold much moisture is why this phrase is accurate.  However, when the air is initially warm enough to hold extra moisture and the temperature begins to drop, the reversion to liquid or solid form leads to a heavier amount of rain or snow.

The point of all of this is simple: whether you want to believe that man has caused/exacerbated the warming trend or not, global warming is demonstrably real.  While it may seem counter-intuitive, especially if you are predisposed to ignore science and data, the snowfall in Little Rock (and anywhere else) does not disprove global warming.  If anything, it supports the idea.