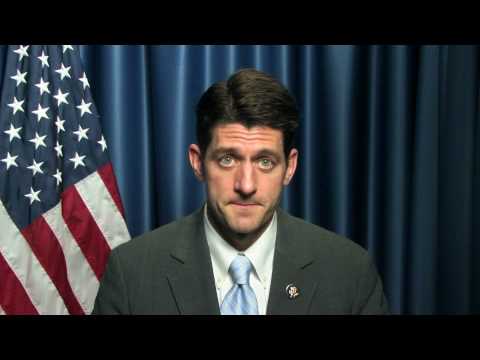 I have to admit, this was WAY harder than I anticipated.  That said, here we go!

1. Paul Ryan is exceedingly fit.  He also has a perfectly straight part to his hair and is wearing a very nice tie.  These three things seem to overcome his ridiculously bloodshot eyes and lopsided (and bizarre) ears, which is a great and wonderful thing for him.

2. Ryan had the courage to challenge voters to hold both parties accountable when it comes to cutting spending.  Based on what the Republicans have done so far, that is amazingly bold, so I salute him for that.

3. Despite being amazingly and mind-blowingly wrong on so many points, Ryan still came across as infinitely more reasonable and sane than Michele Bachmann.  Wow, is that one crazy woman.  BUT SHE DOES HAVE SLIDESHOWS, AND YOU WILL RESPECT THOSE!

Bonus #2: Speaking of Bachmann, can someone please explain to me how medical malpractice reform, which is government regulation of a pure jury system, represents a “free market solution” to a problem?